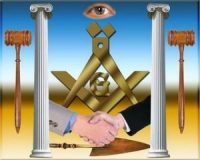 A Masonic calendar is based upon the date of an event or a beginning.

Craft Masons and different appendant bodies within Freemasonry utilize different Masonic calendars to celebrate an historical inception date such as the creation of the world or an historical event specific to that Masonic order or body.

These dates are used upon official Freemason documents.

The historical dates are symbolic of new beginnings, and should not be misconstrued as Freemasons believing that there was a Masonic lodge in the Garden of Eden.

Symbolically, they connect the creation of physical light in the universe with the birth of Masonic spiritual and intellectual light in the candidate.

The only idea intended to be conveyed is that the principles of Freemasonry are as old as the existence of the world.

It is the spirit of the institution of Freemasonry which brings a candidate from intellectual darkness to intellectual light.

Each of the “Mason” calendars, below, begin with the word, Anno.  In the Latin language, Anno means In the Year of.  The English word, annual, is derived from the Latin word, anno.

Anno Lucis is Latin for In The Year of Light.

Historical Significance:  The Year of Light signifies the date of the creation of the world (approximately 4000 years before the Common Era), as we read in the third verse from the Book of Genesis in the King James version of the Bible as well as in the Torah.

Ancient Craft Freemasons in the York and French Rites, residing in Scotland, England, Ireland, France, Germany, and in America, use the words, Anno Lucis.

Relevance:  The Ancient Craft Mason Masonic calendar celebrates the creation of the world, approximately 4000 years before the Common Era, or 6010 years ago.  The word, “approximately” must be used, here, because, historically, there were many different calendars in use over the last 6000+ years.  This makes precise dates very difficult to ascertain.   (Some historians believe it to be 4004 years before the Common Era.)

Anno Mundi is Latin for In the Year of the World.

Historical Significance:  Anno Mundi also begins with the date of the creation of the world, but is based upon the older, Hebraic (Hebrew) calendar, which begins the civil year in September rather than the Gregorian calendar in use by us, today which begins the new year in January.

Relevance:  The Scottish Rite Masonic calendar celebrates the creation of the world, 3760/3761 years before the beginning of the Common Era (C.E.) or 5770 years ago.  It is counted using the Hebrew calendar.

Anno Hebraico:  In the Hebrew Year

Anno Hebraico is Latin for In the Hebrew Year.  It is sometimes abbreviated as A.H or A:.H:.

Historical Significance:  Tishri; Tisri – tish’-re, tiz’-re:  Tisri, or Tishri, is the 7th month of the Jewish ecclesiastical, and the first month of the Hebrew/Jewish civil year. (September-October).  Tisri begins with the new moon in September.  Tisri, or Tishri is called Ethanim in 1 Kings 8:2.

Anno Ordinis is Latin for In The Year of the Order.

Historical Significance:  In the year, 1118 C.E. (Common Era), 9 French knights, followers of King Baldwyn, the King of Jerusalem, and at his behest and in his presence, took vows of poverty, chastity and obedience.  With great humility, they assumed the title of the Poor Fellow Soldiers of Christ.  The job of this brotherhood-in-arms was to protect the pious pilgrims in their passage to the holy city of Jerusalem.

King Baldwyn assigned them residence in a part of his palace which stood near the former site of the Temple of Solomon.  The Abbot and Canons of the Temple gave them a street between the palace and the Temple in which to store their arms and magazines.  Thus, they derived the name of Templars.

Relevance:  The date 892 A.O. celebrates the operative and speculative existence of the Knights Templar from its origin in the year, 1118 C.E. over the last 892 years.

Royal Arch Masons:  In The Year of the Discovery

Anno Inventionis is Latin for In The Year of the Discovery.

Little is known or written about Zerubbabel except that he was a famous man and that at all events, Zerubbabel was governor of Judah in the second year of Darius Hystaspis’ reign in 520 B.C.E..

The Masonic calendar used by Royal Arch Masons dates from the year of the second temple having been caused to be built by Zerubbabel in 530 B.C.E..

Relevance:  The date 2540 A.I. celebrates the building of the Second Temple, 2540 years ago, believed to be on or very near the site of Solomon’s Temple in Jerusalem.

Royal and Select Masters & Cryptic Masons:  In The Year of the Deposit

Anno Depositionis is Latin for In the Year of the Deposit.

Historical Significance:  Anno Depositionis dates from the year in which the Temple of Solomon was completed in 1000 B.C.E..

Relevance:  The Masonic calendar which Royal and Select Masters and Cryptic Masons celebrate is the year in which Solomon’s Temple was completed, 3010 years ago.

Anno Bonefacio is Latin for In The Year of the Blessing.

Historical Significance:  This date is used by the brethren of the Order of High Priesthood to signify the elapsed period of time calculated from the year of the blessing of Abraham by the High Priest, Melchizedek as referenced in Genesis 14:18-20.

Relevance:  The Order of High Priesthood celebrates the blessing of Abraham by Melchizedek, 3923 years ago as the beginning of their Masonic calendar.

Other Freemason Rites (degrees) have their own Masonic calendar, but these are the most well known.